Ronda Rousey suffered a nasty injury on the set of Fox’s 9-1-1 series, according to TMZ.

Rousey reportedly broke two of her fingers (middle and ring fingers) while filming scenes in Mexico last week. The incident happened when Rousey was supposed to slam a door during a dramatic action moment.

“She was a little over-exuberant and slammed the door on her finger,” TMZ was told.

The middle finger suffered the worst of the injury as the tendon was nearly severed. She also fractured the tip of her ring finger. Rousey was taken by ambulance to a San Diego hospital for treatment. Her middle finger was reportedly repaired with a bolt and screws.

Rousey reportedly never broke character during the incident and returned to work the next day.

As noted last week, Rousey has signed on for a new role in the hit first responders drama from Fox. She stars as firefighter Lena Bosko, a character that was described as a stoic and fearless member of the Los Angeles Fire Department Station #136, who leaps into action to save lives when a disaster hits. The third season of 9-1-1 will premiere on Monday, September 23 at 8pm ET on Fox.

Rousey, who remains signed to WWE and a member of the RAW roster, is currently taking time away from the company. She left after WrestleMania 35 and has said she was taking time off to expand her family with husband Travis Browne.

Courtesy of TMZ, below is a graphic photo of the injury: 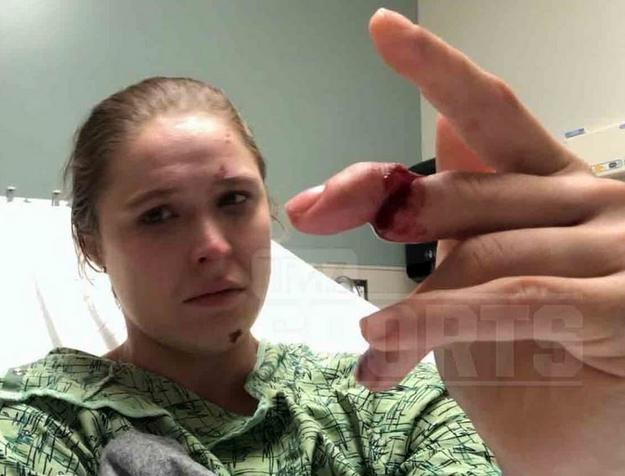